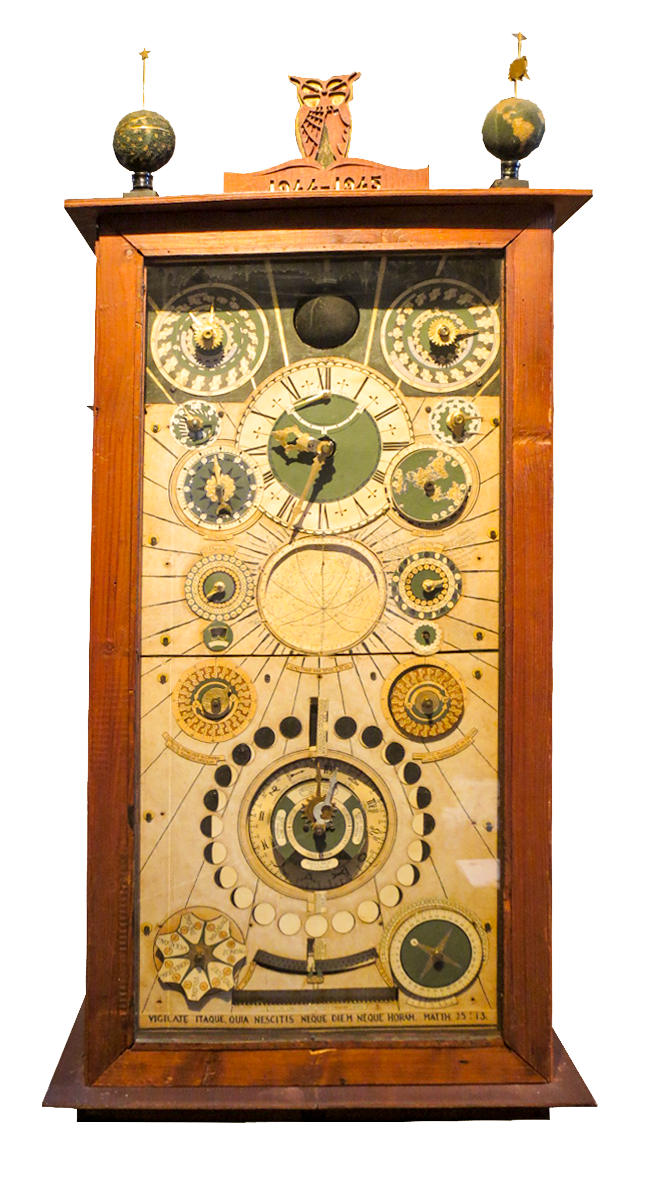 Overall look of the clock inside it’s clockcase (july 2021)

Introduction - The Astronomical Clock according to Maurits Sijnja

Maurits (or M.P.D. Sijnja as he usually was referred to in the MGN periodical called Meccano Nieuws) was no stranger to MGN members. As far as I know, Maurits was a member from the very beginning of the MGN, the later one founded in 1982. In addition to actively participating in Meccano meetings, Maurits also helped The MGN board in the early years of it’s existance.

My first acquaintance with the astronomical clock was in 1982 at the Techniek in Vrije tijd fair in Utrecht, where a 60m2 Meccano stand had been set up on behalf of the MGN. This was a very impressive fair and of all the Meccano models shown, the astronomical clock is the most memorable model to me. This is a purely personal observation. Other visitors will undoubtedly have other models in mind when they think back to the aforementioned fair.

Incidentally, it took until 1987 before I became a member of the MGN. Sleeping member, I have to say, because the priorities until 2000 were more with study and work rather than the Meccano hobby. After 2000 I became a bit more active and I sometimes met Maurits at the annual Meccano exhibition in Ede. Much to my regret now I have never spoken to Maurits personally . . . After the death of Maurits in 2006, contact with the family and the Meccano community was lost and the astronomical clock was lost to sight.

How did the clock come back into the picture?

Over the past 20 years I have built various models, partly based on model plans and partly designed and built myself. In recent years I realised that access to knowledge in the form of model plans and related documents is necessary to reach a certain level or to be able to build a certain model at all. After all, you can’t invent everything yourself, and there’s no point in reinventing the wheel, given that you’re even capable of doing such a thing. Exchange of ideas and knowledge is therefore important to help the Meccano community.

During my search for information about Meccano planetariums or orreries, I accidentally came across a photo of Maurits Sijnja’s astronomical clock. Of course I recognized the clock of the fair from 1982 and wondered what had happened with this elaborate model. Did this model still exist and if so, could it still be traced? To my knowledge, this model has never been described in MN, other than a single image taken at a meeting.

A first attempt to gather more information about Maurits Sijnja via the MGN yielded some results, but proved to be of no use in finding the clock. I contacted a MGN member from whom I knew he was well aquinted with Maurits. Thanks to this member an emailadress came up from the son of Maurits, Marco. At least I could contact a direct family member.

Via email I wrote Marco a message explaining my intention. After a week I got an answer. Marco was pleasantly surprised that there was interest in his father’s astronomical clock. After some email exchanges I received an invitation to visit his house for an extensive photo session.

The visit that had been planned for 2 hours, but turned into a 5 hour high valuable experience. Marco gave all the information and I was given every opportunity to photograph the clock in all it’s detail.

Based on the photosession I was able to make a 3D computermodel in VirtualMec. This model can be downloaded here or via the VirtualMec website.

The explanatory of the astronomical clock.

During the making of the 3D model I started making engagements for most of the movements trying to find out how the model works. This process including the working of the clock and explanation of all dials of the clockfront has been documented in a 60 page pdf booklet. This booklet can be downloaded here. Be aware, that this pdf file is in dutch, but you can always use google translator and some parts don’t even require a translation as they speak for themselves. The booklet is not only an informative document, but it is also a tribute to the creator Maurits Sijnja.

Extract of the explanatory (august 2021)

Don’t forget to visit my YouTube channel as well!