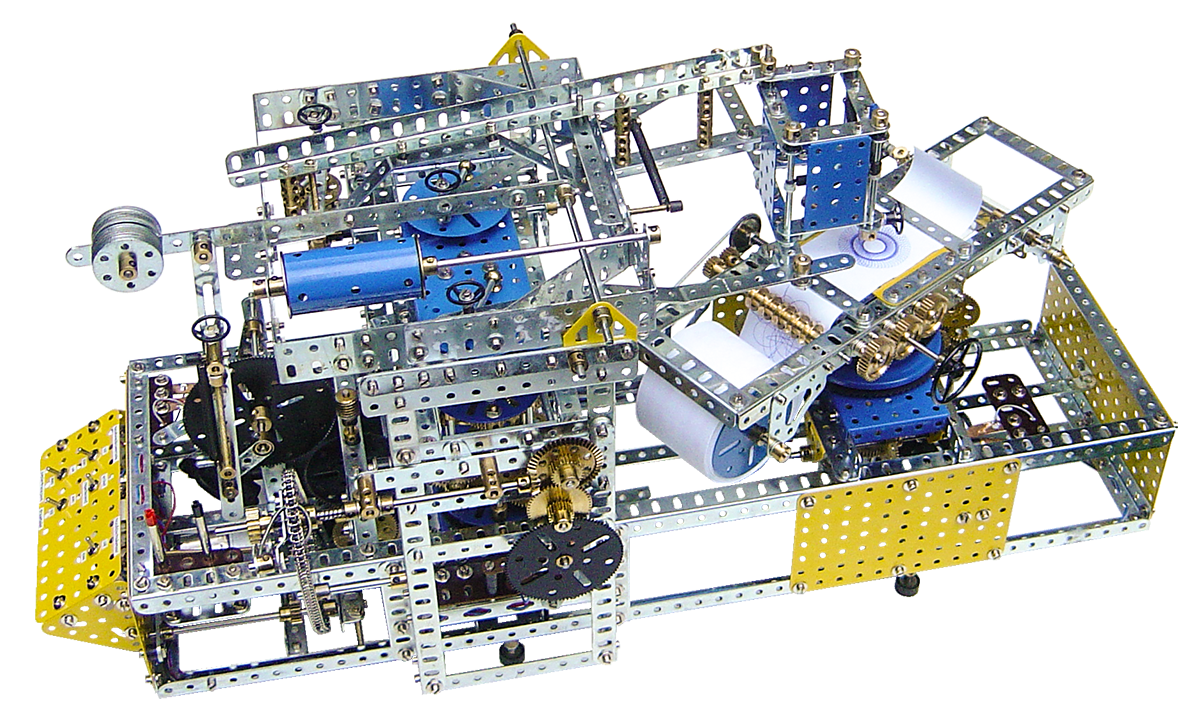 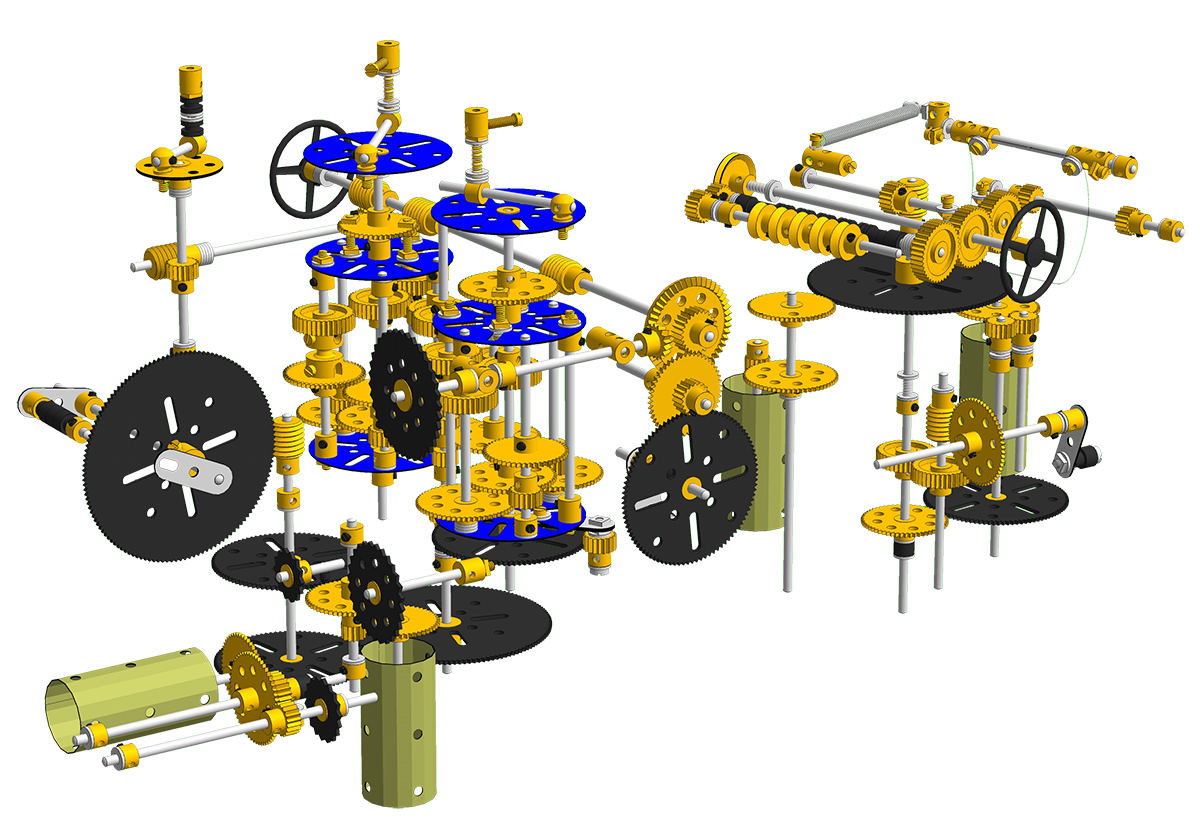 This famous model is based on the Super Meccanograph of Dr. ir. A. H. Boerdijk.

The original has been developed and built in the early 1960’s. After 1990 the Super Meccanograph was more or less lost out of sight. By the mid of 2007, research done by Wilbert Swinkels led to the tracking of this model.

In the latter part of 2007 a replica was built and in January 2008 a computermodel in VirtualMEC was generated, based on the replica.

All of this has resulted in the making of Modelplan 182, available at MWMO.

Visit my YouTube channel Meccano Kinematics to view the working of this model. 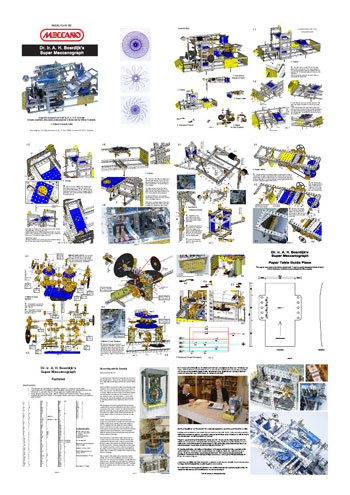 In the past I have been contacted by a few Meccano friends who did have some questions regarding MP 182. It’s likely, that more builders will cope with the same kind of questions and therefore I decided to publish some of these issues on this site.

As mentioned on the CD, which is part of MP 182 it might have been better to use for M3 also the same rpm as M1, because synchronity between the devices driven by these 2 motors is absolutely neccesary to get satisfied drawings. The speed of these 2 motors (M1 and M3) have to be exact, because the devices actuated by these motors must run synchron. If not, the tip of the ballpoint does not end where it began on the paper, resulting in a drawing that looks not correctly finished. The best solution however is the use of steppermotors.

M2 and M4 run only within a limited time and these motors actuate the geardrums and the papertransport (they don’t have to be exact). It’s obvious, that these interactions must be finished before the pen is pushed downwards to the paper again to start a new drawing.

It must be mentioned, that the well known Meccano (Marx) M5 motor, which is a wonderful piece of engineering, does not comply with the engineering requirements regarding the torque. This motor can not be used as a substitute for M1 and M3.

I ordered the motors directly from Jameco, a USA based company, worldwide delivery.

Attention: after a close study at the current links (december 2013) regarding the Jameco motors, it became clear to me, that the specifications of the motors as sold by Jameco regarding the rpm parameter have been changed over time. For this reason I substituted early January 2014 Motor M1 and M3 for steppermotors and I can strongly suggest to use these type of motors, as these motors are commonly available and the rpm can be programmed with a programmable shield like for example the Arduino.

2 program and Arduino board for the steppermotors.

I used an Arduino Mini. The code to operate the steppermotors including the Arduino Mini is for sale at €15,-. The electrical diagram to connect all the wiring is as following:

I have used bent flat girders for the balance frame, making them unusable in another model. I do not demolish the meccanograph. It’s a wonderfull piece of mechanical engineering to be kept for the rest of my life. Therefore I do not bother to modify single parts to be used for this specific model. The reason for using bent parts within this specific construction are explained on the CD.

the diagrams on page 18 and 19 of the ModelPlan must be studied very well in order to understand the interactive working of the switches. In general, the crank mounted on the 133th axle does make 1 rotation per session. Each session consists of making 1 drawing and changing the gearratios of the penarm and feeding the paperroll.

The machine operates as following:

The ratched device was a feature I added (the original doesn’t have it), but at the end it became clear that it was of no practical use and therefore it has not been described in the MP.

To transport the paper I used a serie of 1/2’’ pulleys, nr 23a. During operation I noticed, that when the paper is running to it’s end, the roll sometimes isn’t transported correctly. I have changed this part of the table conform following picture. The 1/2’’ pulleys 23a must be token out and in stead of this part 142m must be placed around coupling 63. A short grub screw 69c must be used to fixate the coupling on the middle of the axle. 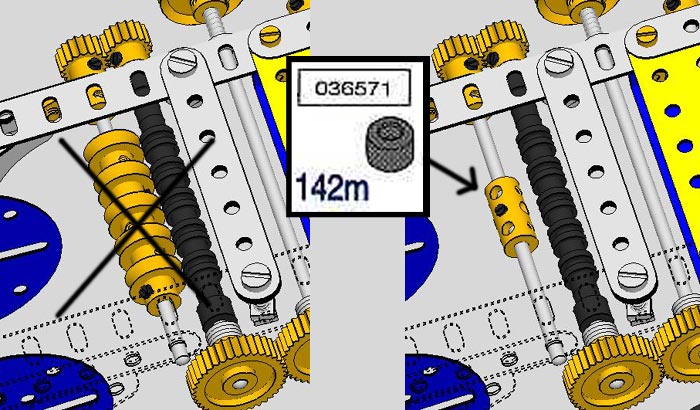 Please note, that neither Dave Taylor nor Frizinghall do sell this rubber tyre, but they use the partnumber as well! You can find this part in the official Meccano dealer partslist. The 6 digit code is a modern Meccano partnumber.

9 56t gear (now obsolete due to the steppermotors)

The 56t gear has initially been substituted by a 57t gear giving a perfect result of a drawn figure. It all depends on the speed of the motor under torque. More torque has an effect on the final speed and substitution of the 56t gear into the 57t gear was neccessary in order to keep synchronity between the papertable and the penarms. 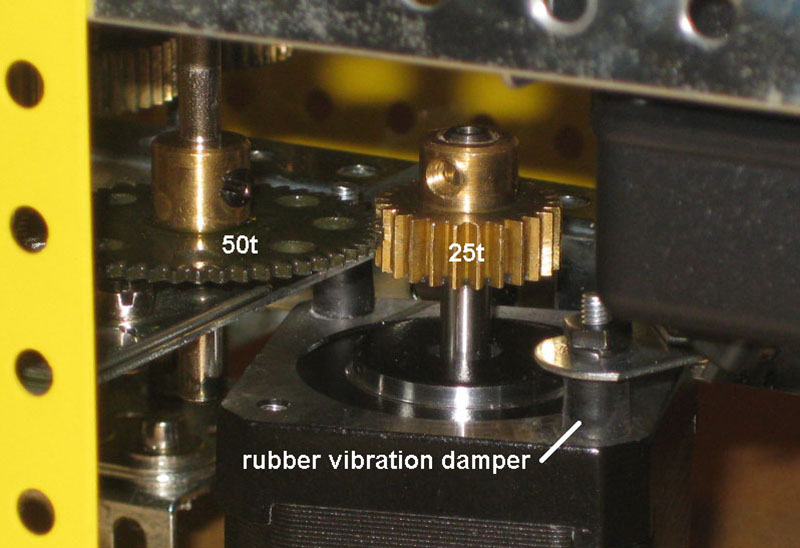 Assembly for M1 (papertable). As per 2019 I substituted the 25t pinion by a 3D printed ABS pinion. This reduces the noise considerable. 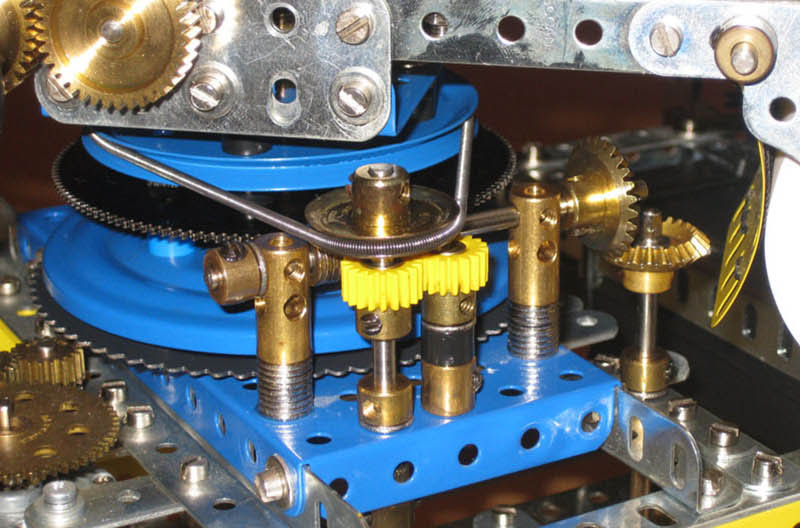 Note, that the Meccano springcord 58 in the picture above is not driving the papertable. The main drive for the papertable comes from the worm gear to drive the 133t gear connected to the papertable. I added the springcord to this assembly in a way, that the cord causes to push 133t gear against the wormgear continiously. The negative effects of the backlash of this gear assembly is now eliminated from the drawing and the papertable is running very smoothly without any vibration. I came to this insight some time after publishing the MP. 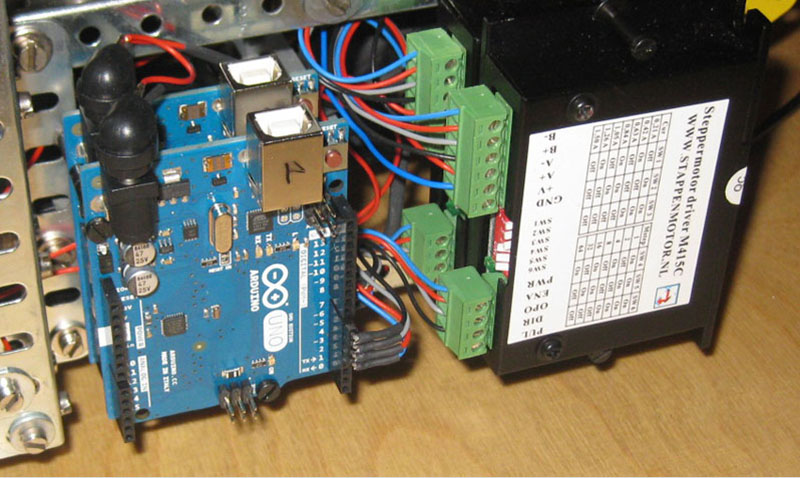 Two Arduino boards and drivers to drive the steppermotors. After some clever coding the code to drive 2 steppermotors can be stored into one Arduino board. I am selling such a board including coding for the Super Meccanograph here. 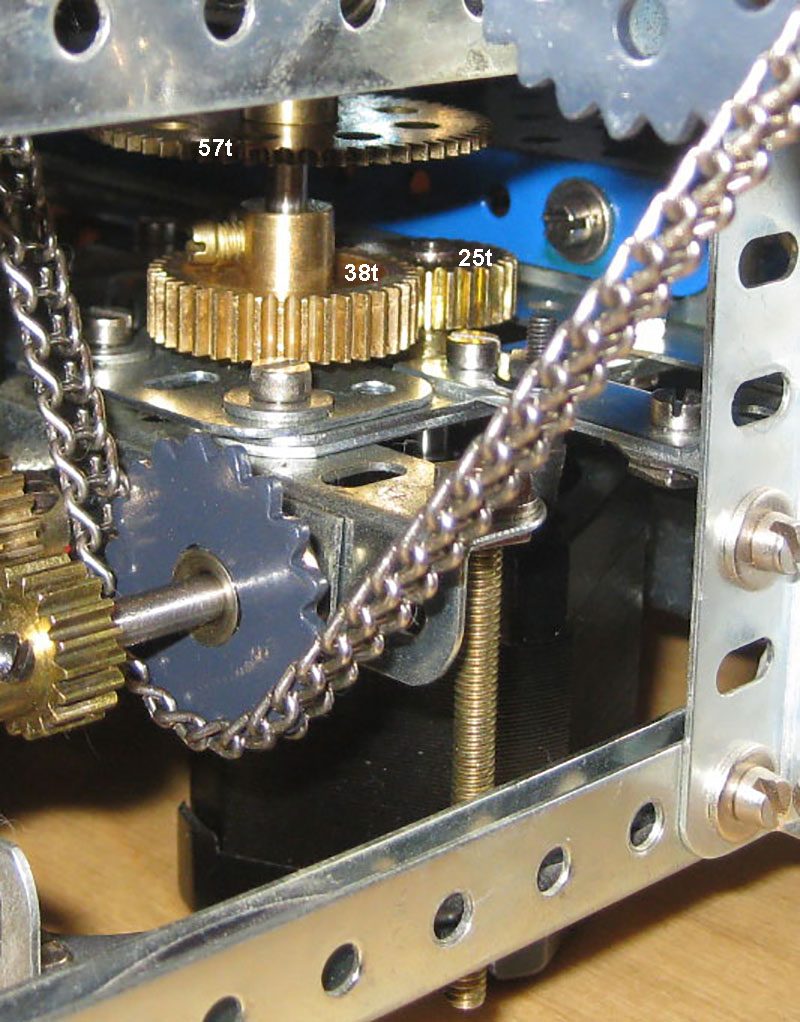 Assembly for M3 (penarms). As per 2019 I substituted the 25t pinion by a 3D printed ABS pinion. This reduces the noise considerable.

10 the Super Meccanograph as a 3D file

The CD, which is part of MP 182 contains a digital file of the Super Meccanograph, called MP182.mdl. This file can be opened with the program called VirtualMEC, of which a demoversion is on the CD. With this file you can have a look at the Super Meccanograph in any direction. All it’s components can be studied separately as if it were sub assemblies.