based on a rack and snail device 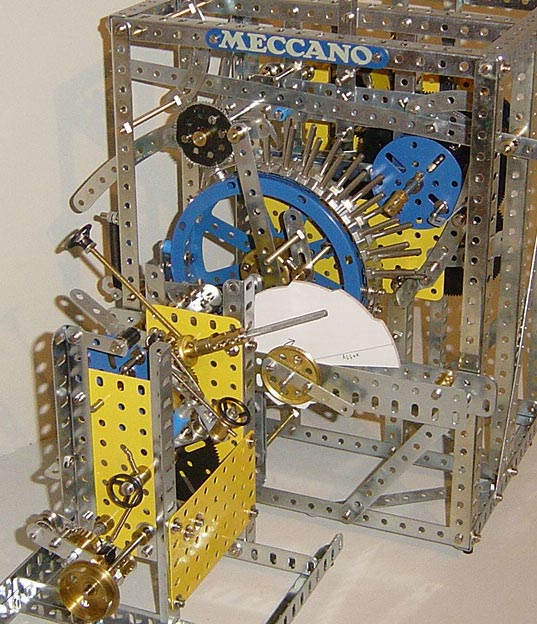 The rack wheel exists of 2 hubdiscs with 19 long pivot bolds fixed on the outside of the wheel. The distance between the topends of the long pivot bolds is slightly more than 5/32’’, thus leaving space for a 1.5’’ axle mounted on a short coupling to rotate freely perpendicular between the aforementioned pivot bolds.

Attached on the rack wheel is a feeler, resting on the edge of the snail. At that moment the number of strikes is defined.

The white camwheel follows the form of a a snail. Each section of the snail represents 1 hour and the distance from the outline of the snail towards the centerline changes by the hour and defines the number of strikes.

The snail is directly mounted on the axis of the hours hand. Thus by rotating the hours hand the snail rotates synchronous and if constructed properly, always resulting in a correct number of striking the hours.

The distance of the feeler to the centre of the snail defines the position of the pivot bold on the rack wheel towards the locking strip.

To reproduce a snail in Meccano is a challenge itself. The snail could be made by a single Meccano strip, yet this is very difficult and almost impossible to reproduce by others.

I have designed and constructed a Meccano equivalent for a cam wheel, based on differential gearing. A full story can be read in Robin Johnson’s magnificient magazine Qonstructor Quarterly, number 120, june 2018.